Will data gathering make the world a better place? (IBM Thinks so)

During the Mobilityshifts week in NYC, I also has a chance to check out the IBM Think exhibit at Lincoln Center. The reason why I went there was that I had heard about visualizations for the massive Data Wall which Casey Reas & co had created. The wall was indeed impressive and children seemed to enjoy playing with it. 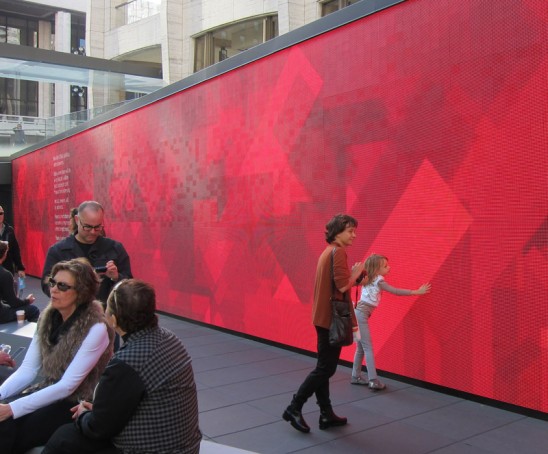 It turned out that the simple information boards opposite to the Data Wall had some quite intriguing content. These boards contained a vision of a Happy Future, with all the improvements that sensors, surveillance and data analysis will bring to our societies. Reading the promises felt like taking a time trip back back to the days 1939 New York World’s Fair that introduced many wonders of consumer devices (including IBM’s electric typewriter). In context of ‘Healthier rivers’, the Hudson River was chosen as the example. In collaboration with IBM, Beacon Institute for Rivers and Estuaries and Clarkson University are in the process of creating a real-time sensor network all along the Hudson River.

Coincidentally, Hudson River was also one of the sites where publiclaboratory.org citizen science projects are taking place (see my previous posting). The goal of these two projects is essentially the same – to get better information about the state of the river in order to improve its condition. But in the approach there are drastic differences:

In addition to these rather obvious differences, an important issue is what kind of opportunities are lost if river monitoring is left to the hands of big institutions. In case of publiclaboratory.org, the tools offer people a concrete way to learn more about their own surroundings and to take an initiative to improve the conditions. Who is more likely to make noise about the companies that pollute Gowanus Canal, the local activists or IBM & co?

In terms of design, the question is whether there is a standardized solution with centralized monitoring or a general instruction which is modified be the local people to suit the local context.

A striking example of the difference between these two approaches that was often discussed during Mobilityshifts were the Adequate Yearly Progress tests that all children in public schools in US have to take. This test was introduced as a part of the No Child Left Behind Act during George W Bush administration. The goal ‘No Child Left Behind’ sounds great, but trying to achieve this goal via standardized tests has been a disaster.

Based on the presentations at mobilityshifts, everyone (teachers, children, parents, school administrators) seems to agree that these tests have not increased the quality of education, on the contrary they have added unnecessary stress to those who are doing well and been discouraging for those students and schools with problems. The points that were emphasised during mobilityshifts over and over again was that people learn in different ways. Good teachers adapt their teaching methods to suit the needs, and luckily here in Finland this is still possible (see Dianne Ravitch’s blog posting about this, her view is a bit too positive, but the main facts are correct).

Unfortunately in many other areas (public institutions, university education, etc) the idea of improving quality via standard tests has been pushed through here in Finland as well, with unhappy results (less efficiency, less creativity, less everything else except suspicion and bureocracy).